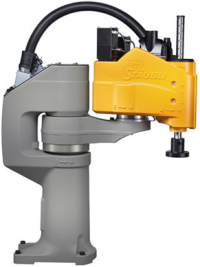 As part of the manufacturing process, a leading producer of corrective lenses uses a robot to load lenses into the Single Cavity Lens Manufacturing (SCLM) machine. Unfortunately, the original machine, is obsolete and spare parts are no longer available from the Original Equipment Manufacturer (OEM).

Review of the Project

The client engaged Grantek to supply, program and integrate a new Staubli TS40 robot on the SCLM #2 line. The goal of the project was for the new robot to load lenses onto the machine like the existing robot. The new robot must be integrated to communicate with the SCLM machine’s Siemens PCS-7 system over Profibus. In addition, the project had the following requirements:

Review of the Solution

Grantek purchased the Staubli TS40 robot and performed the required programming at our Burlington facility. Grantek also performed all electrical design. As part of Grantek’s project management methodology, a complete Factory Acceptance Test (FAT) was conducted in Burlington to test all required movements of the robot, as well as cycle times, and response to powerloss. Grantek executed the FAT with a Siemens PLC providing a complete simulation of the onsite system.

The new robot replacement arm had different geometry than the previous robot. To maintain the same guarding and form factor Grantek had to program the robot to take a specific path through the machine. To ensure reliability, Grantek reprogrammed all the homing, and fault or e-stop recovery logic to ensure it took the correct path home.

The SCLM vendor program was very complicated, and occupied an entire 32 kb of application memory. Grantek’s engineers reviewed and reverse engineered this complicated program to identify the touchpoints for robot control.

Grantek successfully commissioned the Robot and performed an onsite SAT. The client’s validation group leveraged this SAT to accelerate validation.

The new robot performs reliably, has a reliable source of new spare parts and eliminates this business risk. In addition while onsite, Grantek trained the client’s engineering staff on how to teach the robot with the built-in teach pendant. The previous robot did not have a built in teach pendent and required specific software on a laptop. This greater ability for the client to maintain and teach the robot in-house has eliminated the need for future vendor support since installed in 2013.